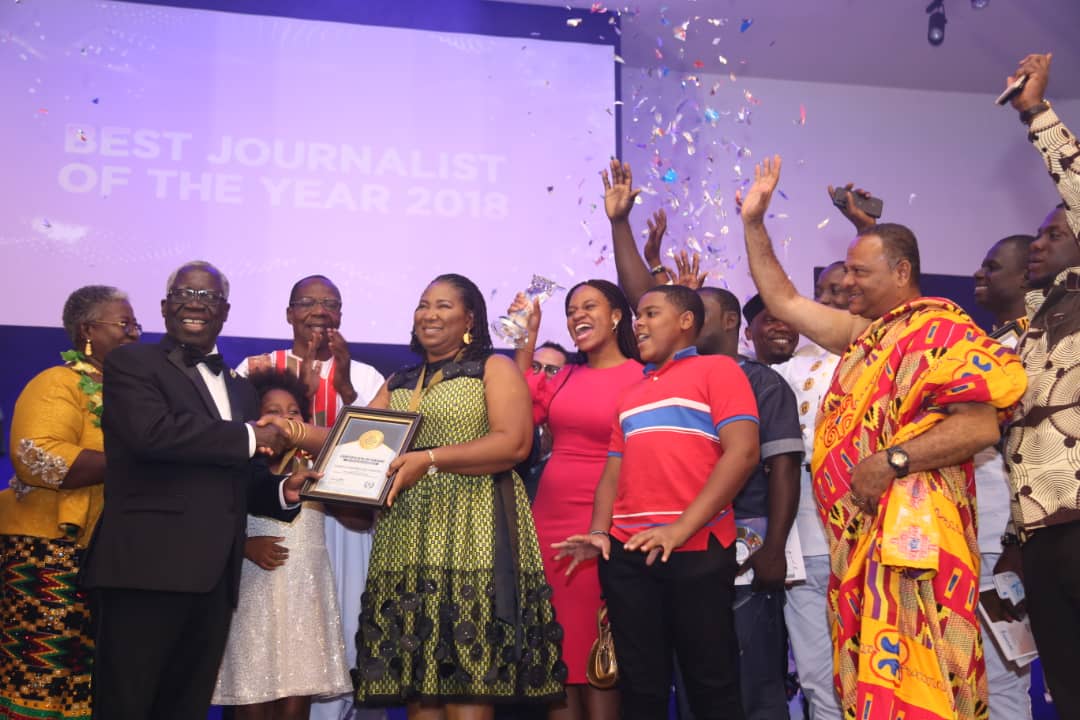 Ms Doreen Hammond of the Graphic Communications Group Limited (GCGL) was adjudged the Best Journalist for 2018 at the 24th Ghana Journalists Association (GJA) Awards held in Accra last Saturday, with the declaration that journalists must at all times uphold the tenets of the profession to accelerate national growth and progress.

“Journalism is not all about politics and I urge my colleagues to continue to uphold the ethics of this noble profession.

Let us continue to be a voice for the voiceless and contribute our quota to the development of this dear nation of ours,” she stated soon after being crowned the best on the night that saw 162 individuals and organisations honoured for their support for and contribution to the development and growth of the media in the country.

Seventy-eight of the awards went to practising journalists and veterans, while 84 went to individuals and organisations which have supported and contributed to the development and progress of the media industry in the country.

The awards ceremony also marked the 70th anniversary of the GJA.

It was on the theme: “Democracy, freedom and independence of the media in Ghana: 70 Years of GJA’s contribution”.

It was a moment of joy and fulfilment as the writer who has won the respect of readers over the years with her interesting, thought-provoking and sometimes healing pieces was called to receive the biggest honour in the industry, popularly known as the Fourth Estate of the Realm.

“These congratulations will go to the GJA Journalist of the Year 2018. You are the winner and your name is Doreen Hammond,” the host, Nathaniel Attoh, had announced.

Flanked by family members and colleagues at the GCGL, the ever cheerful Ms Hammond, whose personality personifies the richness in her writings, walked to the stage to receive her award from the Senior Minister, Mr Yaw Osafo-Maafo; the President of the GJA, Mr Affail Monney; a former President of the GJA, Mrs Gifty Afenyi-Dadzie, among other dignitaries.

The GCGL dominated the awards by winning 12, including the Best Newspaper of the Year, which went to the Daily Graphic.

Typical of her, the Journalist of the Year turned her acceptance speech into the same work of art in her writings by touching on issues which always hit the nerves.

She criticised what she described as “slay queen and king” journalists, a reference to journalists who have abandoned the ethics of the profession and rather turned their work into an avenue of self-aggrandisement.

“It seems to me that to be recognised in this society of ours, you have to rub shoulders with slay queens and kings. That is not the kind of journalism we were introduced to.

“I know there are many journalists doing great things in the background. To them, I say don’t give up, your reward will come in God’s own time,” she said.

She urged journalists to continue to perform their duties in a manner that conformed to the ethics of the profession and also contributed to national development.

Ms Hammond thanked her family, her colleagues at the GCGL, the group itself for providing her with the platform to do wonders with words, the GJA for the recognition, mentors, lecturers who taught her in school and others who had contributed to her success.

“Thank you for supporting me to do what I do,” she added.

In an interview, Ms Hammond said the award would motivate her to continue to write articles that would shape the future of the country.

“I am now the Editor of the Junior Graphic and so definitely children will be a key focus, but I will continue to write about other issues and ensure that my writings bring out issues that will help in the development of the country,” she said.

Who is Doreen Hammond?

The name Doreen Hammond is a common feature in the Daily Graphic.

During her time as the Features Editor, she did not only edit and ensure that people’s opinions were properly presented to readers; she also wrote and continues to write articles on many issues.

Until her appointment as Editor of the Junior Graphic in September this year, Ms Hammond was the Features Editor of the Daily Graphic, a position she had held from 2008.

She is also a multiple GJA awards winner.

As a Senior Staff Writer at the Daily Graphic from May 2004 to 2008, she acted in various positions, including Features Editor, Education Page Editor and Women’s Editor.

She worked with the New Times Corporation from 1991 to 2004, where she was a stringer, reporter, acting Women and Children’s Editor of the Ghanaian Times and News Editor of the Spectator.

She is a product of the Ghana Institute of Journalism.